Tips For Singapore Web Designer: How To Handle Negative Spaces in Web Designing 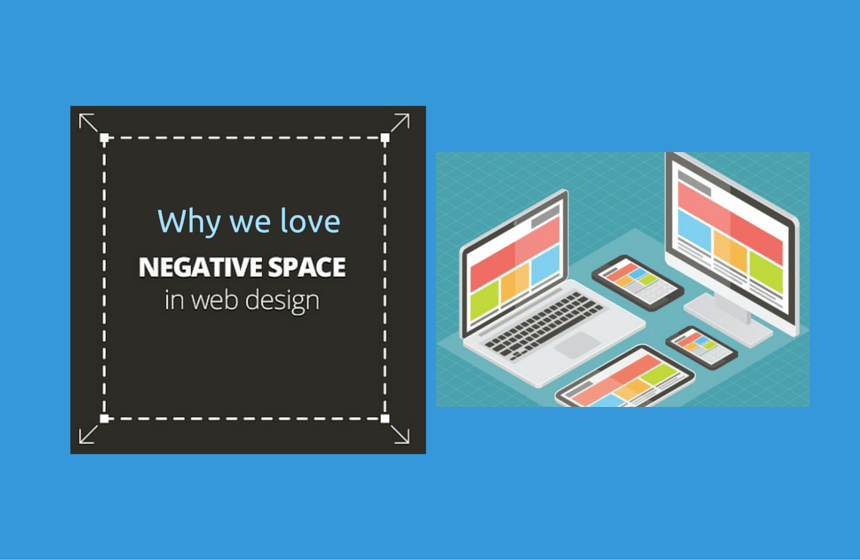 Looking for a web designer in Singapore who understand the importance of negative space? In the world of web or mobile app designing, space is like the air we breathe. It’s the building block of every great design out there – though in ways that many people fail to understand.

People have a weakness of seeing items occupying space while ignoring the space itself the whole beauty of it.

Take a look around – what do you see? If you’re in a room, the only thing you’re seeing are the four walls making up the room, and perhaps some chairs, cabinet, table, couch, and/or some other items.

Now take a look at how these items are organized. How are they arranged? Do you see any space between them or are they close to one another that you can feel the clutter.

Clutter isn’t exactly good; and that’s because it’s a distraction that keeps you from performing your daily routine-work more appropriately, while in the room.

Clear the Room to Create Some Space

There’s only one way of dealing with the clutter around your room – and that’s, clearing all the items you have in the room to create more space. You can start by putting every single one of the available items in their appropriate locations.

The whole point of doing this is to create a reasonable amount of space around them so you can clear the clutter and create some space between them.

This is in so many ways similar to how user interface designs operate. Different UI elements aren’t just put together – some empty spaces have to be created between them, on the screen.

Commonly referred to as whitespace, the empty space is meant to provide a clean and neat design, in addition to creating an environment where users perform more optimally, without being overwhelmed by unnecessary clutter on user interface.

Decluttering is even more important in designing than it is in your living room. Users need it as breathing space when they’re navigating your site or mobile application.

That being said, here’re a number of ways negative space is so important in designing:

They’ll be able to scan through a web page more intuitively and understand its structure – and at the same time, be able to trace all the crucial UI elements with a sweeping glance.

If NOT for anything else, the negative spaces deliberately inserted in between different UI elements are meant to declutter your content. They’re meant to ensure that similar items are put together and place in their most appropriate locations, with nothing left to overwhelm the user.

Where certain elements relate, it makes more sense to put them together and pick an appropriate slot for them in your overall design idea.

You get to separate Un-related Elements

Negative space allows you to set a clear distinction between two or more unrelated items on your UI design without going explicit about it. You don’t need an overt separator, just some reasonable spacing and you’re good to go.

You can highlight the important elements in your design by spacing them. That way, users can quickly glance over the design and quickly pick on all the important action items on your design without looking at it twice. That’s because spacing has a way of making some item more prominent and noticeable.

Negative spaces can define your website page structure. Through them, a user can quickly scan a design and figure out its layout, and where exactly they should be headed to achieve a particular feat.

Negative space has a way of providing a more appealing and attractive user experience by creating a simplified format that’s appealing to the eye.

Again, think of the spaces as a breath of fresh wear. After going through a block of texts and a series of other elements, users encounter some free space where they stop to take a few breaths of fresh air to continue digging through the content on your site or mobile application.

The Difference between Negative Space and White Space

Negative and white space can be used interchangeably as they both amount to much the same thing.

To understand the reason behind the two different names, first you have to understand the origin of each one of them. The term white space has closer ties to the print design, where the print papers used were mostly white in colour. Meaning everything else, other than the letters, illustrations, and symbols was nothing more than a white space.

In design however, whitespace has nothing to do with colour and everything to do with space. So as long as there’s space in between different design items, regardless of the background colour, that qualifies as white space.

Negative space on the other hand is closely tied to photography — where the positive space is made in reference to the object attracting attention, and negative means the space in the background.

Micro negative space is mostly targeted at making a piece of content more legible. For instance, your reading speed is more likely to be affected when there are some marginal white spaces surrounding your content paragraphs.

here texts appear in the margins that fall far outside the regular paragraph, users are likely to have a hard time reading through the text. So they’ll be reading it much slower, and even finding it hard to comprehend what the text is all about.

Macro white spaces are the large spaces existing between different layout elements. They also include the spaces between design layouts. These spaces can be found at the right and left hand side of your site’s content or in between content blocks.

Unlike micro spaces, macro spaces can act as containers to your overall design. They’re the big-picture white spaces that are easy to notice by just looking at your website.

Google is one of the websites that has managed to take full advantage of macro white space by intensively using it on their homepage. The iconic Google look is simple but really beautiful.

The simplicity brings with it a calming effect, because you feel like the entire website has been full de-cluttered so you can focus on what brought you here – and that’s searching or Googling for that one thing that you wish to find or learn.

It bears repeating that micro white space is crucial for making your interface content more legible. It’s for this reason that designers are encouraged to consider white space while deciding on their design specifications and typography, particularly style, font, tracking, kerning, and colour.

Keep in mind that changing the layout of white space will certainly affect how the post performs together with the overall user experience. Happy readers will also be more motivated to hang around your site for longer.

Negative space has a direct impact on the overall tone of your design. For instance, websites that stack high amounts of macro negative spaces may appear to be more skewed on minimalism and luxury.

On the other hand, websites that tend to go slow on macro white space and fast on micro white space tend to come across as content-oriented and informative.

It’s to be however noted that none of these indications is written in stone. As a designer, you’re allowed to test the white space in your design, in your own unique way to figure out how to best enhance your users’ experience.
You’re also allowed to test them on your users to find out how they perceive the design.

You can use negative space to guide users through interactive content. In this way, you’ll be able to establish the focal points that will be guiding your users to specific layout parts.

As a designer, the most crucial aspect of planning for your website is figuring out how you’ll be giving certain elements of your website or content more priority. You have the option to use visual element to draw some light on specific elements and make them stick out. Another option would be to try and play around with the amount of white space around some of the focal points so you can draw the much-needed attention around them.

From definition, website negative space is nothing more than the empty areas between different design elements. However, in web designing, it’s one of the most essential tools that designers use to come up with user-friendly designs for both mobile and web applications.

Although it’s also referred to as white space, this space doesn’t have to be necessarily white in colour – but empty, in the sense that there’ll be no user interface element or content filling up the space.

For more information on the role of negative space in web designing, kindly reach out to MediaOne Marketing today, and let’s talk.